A multitude of issues occupy the National Park Service (NPS) at Organ Pipe Cactus National Monument (ORPI). These issues range from managing the nation’s border to

protecting against invasive plant species. As stipulated in the 1916 Antiquities Act, the NPS has been charged with maintaining the park for the enjoyment of the public while also preserving the land, wildlife, and artifacts that exist within the park’s borders. In 2011 Organ Pipe Cactus National Monument provided enjoyment for over 210,000 visitors.[1]

Managing the nation’s border has become a paramount issue for ORPI rangers, “illegal border-related activities influence every aspect of park operations.”[2] The park contains a total of thirty miles of shared border between the United States and Mexico.[3]Increased Border Patrol activity elsewhere on the border has shifted migrant and smuggling routes into areas such as ORPI.[4] This traffic causes problems for homeland security, as well as for wildlife and the landscape. Because the park contains a piece of the border, the NPS Rangers have to patrol the border as well. This role as a border patrol agent consumes a majority of their time. In fact, the superintendent of the park, Lee Baiza, said that eighty percent of his time is spent handling border-related issues.[5]

One of the major issues of the border is drug smuggling. In 2005 Organ Pipe Cactus National Monument rangers secured seventeen thousand pounds of marijuana.[6] In 2010 the Tucson sector (which includes ORPI) was responsible for half of all border arrests and drug seizures.[7] The main issue of drug smuggling is obvious; the United States does not want drugs pouring into our cities and reaching the citizens. This is of course the main concern for NPS rangers; however, a secondary issue exists. This secondary issue is the damage to the wildlife and landscape of the park. Vehicles used for drug smuggling (as well as human smuggling) carved out over two hundred miles of illegal roads within the park.[8] Along with roads there is an even greater amount of unauthorized foot paths created by smugglers and migrants. Roads and foot paths combine for thousands of miles of illegal, destructive trails.[9]

The trash left behind by users presents one of the biggest issues of the trails. The most 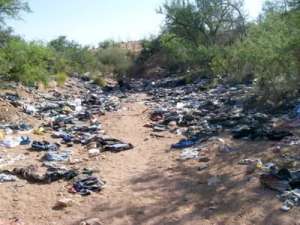 common trash comes in the form of food wrappers, backpacks, clothing, and water jugs.[10] This trash accumulation contaminates water and thus threatens the wildlife that depends on it. For example, in 2003 the United States Geological Survey (USGS) tested Dripping Springs (a spring located along an illegal immigration route) and found E. Coli levels that were higher than normal.[11] Trash also has the ability to inhibit water flow reducing the water levels that wildlife depends on.[12] Trash remains a concern, in part because of the lack of established roads and must be hauled away manually. ORPI rangers rely on the help of volunteers, such as Humane Borders, to remove trash from the park.

The park invested eighteen million dollars to construct a vehicle barrier in order to inhibit illegal traffic flow.[13] This barrier stretches across twenty three miles of the border.[14] The barrier was constructed quickly after the death of NPS ranger Kris Eggle, who was shot and killed by a drug smuggler following a pursuit. Although the barrier does not stretch across the entire border it has drastically reduced the amount of illegal vehicle traffic within the park.[15] An increase in various surveillance techniques has also helped to deter drug smugglers, as well as help those who may be in need of assistance. These techniques include: ground patrols, search and rescue teams (BORSTAR), as well as helicopter and fixed wing flyovers.

It is the goal of NPS to protect the park as well as provide enjoyment for its visitors. Several endangered species exist within the park, including the Sonoran Pronghorn as well as the Desert Pupfish. Several human artifacts including items left by Native Americans as well as early miners and ranchers exist in the park.[16]