The Antiquities Act of 1906 gives the President of the United States the authority to establish national monuments in order to protect “objects of historic or scientific interest.”[1] In 2001, President Bill Clinton set aside 487,000 acres of the Sonoran Desert in southern Arizona creating the Sonoran Desert National Monument. This monument site is about seventy miles southeast of Phoenix, Arizona. 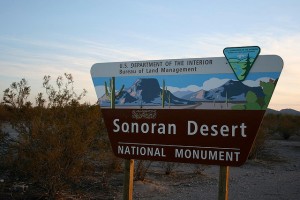 The national monument is divided in half by Interstate 8, with about twenty-five miles of land stretching in either direction.[2] In addition, the monument site includes the Maricopa, Sand Tank, and the Table Top mountain ranges. The Sonoran Desert is the most biologically diverse of all of the North American deserts.  The area is known for its saguaro cactus forest, yucca plants, and desert tortoises. [3]  The monument also protects several cultural ruins from the Hohokam and other native peoples.[4]

Interestingly, the National Park Service does not manage the Sonoran Desert National Monument. It is up to the Bureau of Land Management to oversee the plethora of plants and wildlife. It is because of the flora, fauna, historic, and archaeological sites that this area of the desert is preserved. In addition to designating the Sonoran Desert National Monument, President Clinton also instituted a Monument Proclamation. This document described the damaging effects livestock grazing can have on the desert’s landscape. Through this proclamation Clinton closed the southern half of the monument to grazing. [5]

However, the Bureau of Land Management fell short of complete protection of the monument as cattle is still allowed to graze within the monument’s northern boundaries. This grazing has depleted vegetation and caused erosion in some areas. Grazing is not the only threat to the Sonoran Desert National Monument. Illegal off-roading has also had a detrimental effect on the animal and plant species.[6] Paths cut into the desert landscape infringe on animal habitats and can cause damage to plant life.

Unlike many other national monuments the Sonoran Desert has no central tourist attraction. The area serves more as a preserve to the various species of plants and animals, native habitats, historic sites, and Indian relics within its boundaries. [7] There are no campsites or other facilities within the monument’s boundaries. However, visitors to the Sonoran Desert National Monument can still camp, hike, backpack, stargaze, take pictures and sightsee within the monument’s area. The closest towns that have lodging facilities are Casa Grande and Gila Bend.[8]

The Sonoran Desert National Monument is important for its preservation purposes. It is one of the few remaining untrammeled landscapes in the Sonoran Desert. Though it is not draw many tourists attraction it is still worth protecting for its cultural and scientific contributions.