A Borderless Future? The Necessity of Territorialization and Entropy in the Physical World

“I see a whole generation/ freefalling toward a borderless future/ incredible mixtures beyond science fiction…”[1]  These hopeful words from poet Guillermo Gomez-Pena capture the spirit of many exhausted by the increasing death toll associated with the U.S.-Mexico border, but can a truly borderless future ever be reached?  One obstacle standing in the way of Gomez-Pena’s vision is the simple fact that borders are a mental creation, and as such, exist as more than political boundaries: borders permeate every aspect of the world around us. However, like trying to mark the international border in the Sonoran desert, most borders are difficult to discern, and consequently the daily battle between territorialization (the physical manifestation of boundaries) and entropy (the elements that degrade them)­­ occurs unnoticed.  The issues facing Organ Pipe Cactus National Monument provide a rare glimpse of such an encounter at work, and serves as an example of how violent these interactions can become if both sides are unwilling to yield.

Although the interaction between territorialization and entropy is easier to witness in the borderlands conflict, these forces define the world around us.  As mental creations, borders’ reality depends largely on individuals’ understanding of what constitutes a division.  In an attempt to dictate political borders, governments often employ acts of territorialization such as constructing fences, implementing various immigration policies, and establishing military organizations to translate a mental understanding into a tangible, physical form.  The issues arising from illegal immigration across the US-Mexico in the past decade has prompted American lawmakers to respond with an idealized fortification of the Southwest.  Collaboration between the Departments of the Interior and Homeland Security has yielded a variety of solutions; one of which was 700 miles of 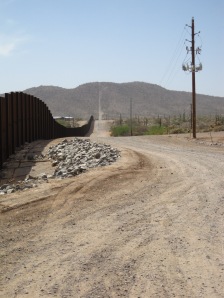 Border Fence Extending into the Landscape

continuous fencing along the border.[2]   However, the lack of physicality also allows humans and even more so natural elements to ignore political demarcations.  For example, the park has been struggling for years to reconcile the design of the border wall, running laterally from east to west along the border, with the surprisingly complicated hydrology of Organ Pipe.  Several small but significant watersheds drain across the border from north to south, and as previous flood events have demonstrated, water becomes a significant issue when its historic drainage becomes obstructed by a fence built to mark a border it cannot recognize.      These encounters vary from passive to violent; however, regardless of form, they are most apparent on the borders of a nation where, according to historians Samuel Truett and Elliot Young, “territorialization becomes real, where physical markers and barriers are erected, and agents of the state regulate the movement of people, goods, and information.”[3]

It is in the borderlands that the agents of territorialization and entropy are easiest to identify.  In the case of territorialization, the influx of Mexican immigrants and drug smugglers constitutes an apparent threat to the cultural and national security of the United States, to which an increase in border securityand manpower is the apparent 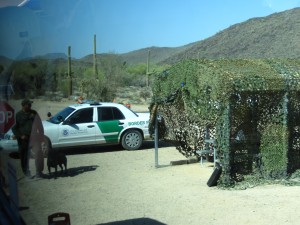 solution.  Along the border—and not just in Organ Pipe Cactus National Monument—fences are constructed to keep immigrants out.  In the park, National Park Service rangers are expected to perform not only their traditional role as guides and interpreters, but are asked to serve as an extension of the border patrol as well.  To tourists travelling through the area, an armed ranger serving as a guide is not an uncommon sight. As one U.S. official stated: “Drug smuggling and related crime have taken a toll on the environment and the quality of life for local residents, besides presenting a threat to the entire country… long-term, without control of your borders you cannot have a secure Nation.”[4]

A more potent threat to those advocating an increase in territorialization, however, is the passage of drugs and the heavily armed Mexican drug cartels that infiltrate the border.  Not only are these groups responsible for intimidation, robbery, and deaths within the park, but the drugs they transport cause addiction and death in American cities as well.  The death of Organ Pipe ranger Kris Eggle at the hands of drug smugglers in 2001

intensified the demand for tighter border security. His mother, Bonnie Eggle, wrote in a remembrance: “Our son was brutally murdered and it should not have happened. It could have been avoided IF some people had cared enough. It is too late for Kristopher, but maybe not too late for his fellow friends and coworkers.”[5]  The effect of drug smuggling can also be felt within the Tohono O’odham Nation, a nation that reached out to the United States for assistance because as Edward D. Manuel—Chairman of the Tohono O’odham Nation—explains: “[drug smugglers] recruit our children to transport the drugs, they lure our teenagers to experiment with drugs such as cocaine, heroin and crystal meth…When our kids become addicted, we have no services to treat them…All too often, they end up in the intensive care units of Tucson hospitals.”[6]

The elements of entropy in Organ Pipe range from environmental to human, and come from both sides of the border.  One such element is the Sonoran Desert itself.  The international boundary cuts a relatively linear line across the landscape, a line that works counter to many of the environmental currents of the region.  The fence obstructs natural migration patterns of many species such as the Sonoran Pronghorn, and while animals may be ill-equipped to combat a physical barrier, their endangered status causes officials to alter the way they approach the border.  Additionally, the seasonal flooding of the park pays little heed to a human constructed boundary, and when flood waters are impeded they cause miles of damage to property and park infrastructure.[7]

Finally, humanitarian groups such as No More Deathsand Humane Borders actively work against the enforcement of the border by aiding illegal immigrants and installing life-saving stations throughout the park.  Like officials and citizens concerned by the rising death toll, these groups cite the preservation of life within the parks as their motivation.

A Recently Cut Section of the Border Fence

When commenting on providing assistance to Humane Borders, the Organ Pipe Park Superintendent Bill Wellman explained: “[It] doesn’t mean we support illegal immigration, but we don’t want people legal or illegal to die in the park.”[8]  People involved in Humane Borders—a volunteer church group from Tucson’s Southside Presbyterian Church—typically understands the complexity of the border issue with regards to national security; however, they are sympathetic to the plight of the illegal immigrant as well.  One volunteer stated: “‘I know we have to have borders, but I wish we could have a border that was more open and fluid.’”[9]

Borders are a mental phenomenon that permeates every aspect the physical world.  They allow individuals to discern, and appreciate diversity: for without differentiation the world would be homogenous and flat.  However, every border brings with it the natural conflict between territorialization and entropy; a conflict that ranges from passive to violent, from minimal to glaringly obvious.  Understanding that these forces are always at play, perhaps someday it will be possible to understand the US-Mexican border in a way that minimizes the conflict between both sides.  Even if a solution is reached, however, there will never truly be what Gomez-Pena envisions: there can never truly be a borderless future.