by Thomas Edgar and Ellen Roth

This website is the product of a one-semester senior seminar at Colorado State University.  The objective of the course was for the class’s eighteen senior history majors to master historical research, writing, and editing methods and to display their work for the public.

The course was divided into three phases. In the first phase, the students learned the historical context of Organ Pipe Cactus National Monument through readings and discussion of primary and secondary sources.  During this portion of the term, students also compiled an extensive bibliography of sources. 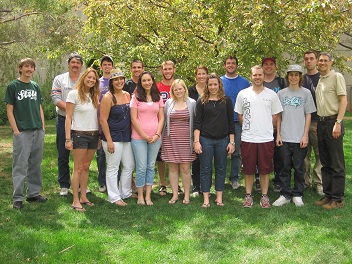 In the second phase, students conducted research using those sources.  Finally, the third phase brought all of this labor together, as students used the knowledge and documents from the first two phases to write and edit content for the site.

To begin the semester, students were required to complete several readings that included both primary and secondary sources. Each was intended to give the students background knowledge of the monument itself, as well as knowledge of the surrounding areas and peoples. For example, to gain a general understanding of the park’s landscape and history we read Carol Ann Bassett’s Organ Pipe: Life on the Edge, and to learn about the environment and economoy surrounding the U.S.-Mexico border we read The U.S.-Mexican Border Into the Twenty-First Century by Paul Ganster and David E. Lorey. Each student was also given a set of primary-source documents from the National Archives branch in College Park, Maryland (NARA-MD). Each student shared in the responsibility for reading, summarizing, and citing these sources.

Next the students began compiling a class archive.  Students were each given ten citations used from a previous class. Each citation had to be checked for accuracy using the Chicago Manual of Style to ensure that it was formatted correctly. The student then had to write a summary for three of those sources, as well as produce hard copies for as many sources as they could. Once this was completed, the students were divided into three groups. One group was responsible for compiling the summaries and hard copies of the NARA-MD documents. The second group (dubbed the “Scavenger” group) was responsible for finding as many hard copies as possible for the compiled citations. The third group formatted the rest of the citations that had not completed by the class and organized all citations alphabetically as well as categorically.  In addition to using the sources from NARA-MD, two-thirds of the class went on a field trip to conduct original archival research in National Park Service documents at the National Archives Rocky Mountain Region branch in Lakewood, Colorado. These volunteers spent the entire day researching and sifting through park documents.  The most interesting documents were photocopied and compiled into a file folder in Colorado State University History Department for research use by students.

Thus within the first four weeks of the term, the class compiled an archives of roughly three hundred secondary sources and dozens of primary sources, many of which were available to students in hard and/or electronic copy, while many others were summarized.

Once the class had compiled all of its sources, web content began to develop. Each student was required to write two “A-Z” entries. These articles were intended to provide short overviews of topics each student chose. For example, a student writing the “Sonoran Desert Pronghorn” entry would conduct research using the class archive, as well as other sources, and produce a short article on the topic. The articles concerned several different aspects of Organ Pipe and the park’s surroundings. Each article was peer reviewed by at least one classmate and the instructor and then revised before entering the final draft. Only articles receiving an 85 percent (a B) or higher were published on the site.

The class decided to divide its presentation of the history of Organ Pipe Cactus National Monument into different sections: Park, Nature, History and People, and Border. A group of four to five students was assigned to each section, and each category was researched in depth, again using the class archive. These articles were subjected to a rigorous review process. Each article was peer reviewed for content and clarity, as well as fact checked to maximize accuracy. Once the original author revised his/her paper it was then copy edited for clarity, grammar, punctuation, etc.

At the end of the term we create the website itself with a design that is easy to navigate as well as appealing to the eye. With the design, we sought to convey both smart and cool—to reflect both the scholarly labor we put into it and the fun we had doing it—and the fun we hope you will have navigating it. Certain aspects of the design were left to the discretion of volunteer committees and submitted to the class for final approval. The professor and two other students handled the technical aspects of the website.  Content for the “Home” page as well as the “About” page was also written by student volunteers and then approved by the class as a whole. All in all, the creation of this webpage involved the hard work of an entire class as well as the dedication and patience of a wonderful professor.