by Brittany Polliard and Ryan Ruegg

Rescue beacons, also referred to as “desert beacons” and/or “panic poles,” are emergency transmission towers located throughout the southwestern U.S., along the U.S. /Mexico border. Primarily established in the Arizona Sonoran desert, where harsh environmental conditions lead to many migrant deaths, more have been placed eastward along the U.S./Mexico border since their original conception in 2001. They were implemented as part of the U.S. Customs and Border Protection Agency’s (CBP) ongoing Border Safety Initiative (BSI), initiated in 1998 to address the rising number of exposure-related deaths among migrants crossing illegally through Mexico into the United States. 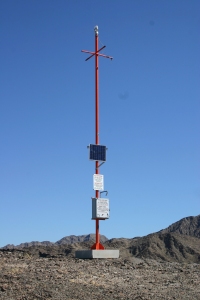 The beacons range from 22 to 30 feet tall (to be seen from a distance), and are powered through externally-mounted solar panels. They are intended to be placed on open, flat terrain. [6] Each pole has a box mounted with a red button which sends out a radio signal to the U.S. Border Patrol. On the top of the pole is a high-visibility light, which blinks every 10 seconds, as well as triangular pieces of polished stainless steel that reflect sunlight during the day. Placards on the beacons contain messages in both Spanish and English such as: “You are in danger of dying if you do not summon for help,” and “If you need help, push red button. U.S. Border Patrol will arrive in one hour. Do not leave this location.” The placards also contain a picture symbolizing a person in distress pushing the button. The original moveable prototypes cost about $3,000.00 apiece produce. [6,7]

According to available sources, the placement and location of USBP rescue beacons, as of 2012, is tracked in the following table. Please note that this information may not be inclusive of all beacons currently in use, and was compiled by the authors through scattered secondary sources. The #Total refers to totals given and inferred in the sources, but without specific reference.

The background leading up to the CBP’s implementation of rescue beacons goes back to the mid-1990s, when the U.S. government’s Southwest Border Strategy and the U.S. Border Patrol’s “Prevention through Deterrence” strategy concentrated the resources and efforts of the Border Patrol in urban centers where immigration was highest, such as in the San Diego and El Paso Sectors.  According to an analysis by the Government Accountability Office (GAO) in 2006, the strategy “assumed that as the urban areas were controlled, the migrant traffic would shift to more remote areas where the Border Patrol would be able to more easily detect and apprehend migrants entering illegally.” [12] Consequently, the flow of migration was pushed into more desolate and dangerous zones, most prominently in the Arizona desert.

GAO figures show that while there was not a significant increase in illegal entries during the period of 1995 and 2005, there was a large increase in migrant deaths, and that an overwhelming percentage of this increase occurred in the Tucson Sector of the Border Patrol’s target zone (from <50 to >200 from 1998 to 2005). The results further show that since 1995, “exposure” has been the largest contributing factor to migrant deaths, and has consistently risen while other factors such as traffic accidents and homicide have decreased. [12, 10]

As such trends were becoming apparent in the late 1990s and early twenty-first century, the U.S. government has enacted programs such as the BSI to reduce injuries and deaths among migrants. The initiative focuses on informational campaigns to discourage travel in hazardous zones through cooperation with Mexico, search and rescue operations, and identification and tracking. [10] Shortly after an incident in May of 2001, when 14 illegal immigrants were found dead in the Arizona desert near Yuma, the BSI started including the placement of the rescue beacons in remote desert locations where immigrants who were lost or abandoned could signal for help [6]. They erected the first six beacons in May, 2002. [14] Referring to the implementation of the beacons, Alfredo Casillas, spokesman for the B.P. Yuma Sector, speculated that “if the large group had come across something like that, maybe we could have saved some lives here.” [4]

Migrants using smugglers are often in the greatest danger of becoming lost, as they are often abandoned by their smuggler if they have difficulty keeping up, or if the smuggler is fleeing pursuit.  ‘Polleros,” translated as ‘chicken-handlers’ (more commonly called ‘coyotes’), is the term referring to smugglers of migrants, and as the name would suggest, migrants travelling with them are often unaware of the dangers, difficulty, and scope of their journey, as they are trafficked across the border. Most migrants are unaware that they will be travelling for days with very little, if any, water or food. [4,8] According to a 2010 Department of Homeland Security analysis of migrant smuggling, between 80 and 95 percent of illegal immigrants use smugglers to get across the border. [11]

Since their implementation in 2001, rescue beacons have aided in the recovery of numerous migrants in distress.  Reportedly in 2005, beacons located in the Yuma and Tucson sectors led to the rescue of 113 people. [14] The numbers continue to increase; it was reported in 2008 that in the Yuma Sector alone, 317 people in distress were saved by the beacons. [5] The beacons also provide benefits to non-immigrants such as hikers, local residents, and tourists. Many accounts of people being rescued by the beacons are available (see works cited and further reading). In addition to the life-saving benefits, the beacons are also easy to maintain, relatively inexpensive, and make a small impact on the environment. The District Chairman of the Tohono O’odham Nation favors beacons to water stations, where trash and empty bottles are often found, citing that: “With the beacons, there are no (environmental) problems. All they have to do is activate the button, and the Border Patrol is there.” [14] Senator Bill Frist, who is also a physician, spoke of the importance of rescue beacons during a 2006 session of Congress in support of the Border Death Reduction Act: “These beacons, I believe, are an absolutely vital link in our border security system…  We know that beacons work: CBP has already saved dozens of people based entirely on beacon alerts.“ [12]