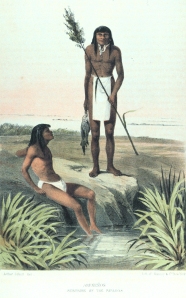 Drawing of the Hia Ced O’odham

The Hia Ced O’odham have been given many names by outside groups throughout their history, such as Areneños, Sand Papagos, and “No Villagers.”[1]  It was not until 1986 that the name they had always called themselves, the Hia Ced O’odham, was officially recognized.[2]  Historically and culturally, they are similar to the Tohono O’odham (Two Villagers) and the Akimel O’odham (One Villagers).[3]  However, the Hia Ced did not live in villages because of their residence one of the harshest regions of the Sonoran Desert.  Here, the little rain that fell came unpredictably and torrentially, making agriculture impractical.[4]  This area now straddles the modern US/Mexican border and is occupied by federal lands like the Cabeza Prieta National Wildlife Refuge, the Goldwater Air Force Range, and Organ Pipe Cactus National Monument.[5]

Although little is known about the Hia Ced prior to European contact, evidence suggests they descended from the earlier Hohokam culture.[6]  Their first contact with Europeans was in the late seventeenth century with Father Kino, a Jesuit missionary from Mexico, who established missions on the Gila River with the Akimel O’odham.  He estimated the population of the Hia Ced at a few hundred.  Believing that natives could be civilized if they practiced sedentary agriculture, Spanish missionaries attempted to entice the Hia Ced out of their homeland to the missions.  The great mover of the Hia Ced population, however, was the region’s incorporation into a commercial economy, which began conspicuously when silver was discovered near the current Arizona-Sonora border in 1736.  Many Hia Ced went to work in mining camps or melted into existing towns to take part in the boom.[7]

The Hia Ced speak a dialect mutually understandable to other O’odham peoples and shared some similar cultural practices.[8]  Their distinction as a manifestly separate entity from other O’odham was to some degree a European construction based on their nomadic patterns.  The Hia Ced had regular contact with other tribes and commonly intermarried, using key landmarks like Quitobaquito Springs on the Eastern edge of their homeland as meeting places.[9]  Despite these interactions, the Spaniards, who carefully distinguished between nomadic and sedentary groups, did not place as much importance on these similarities and took them as separate peoples.

The Hia Ced are the only O’odham people who do not have their own reservation.  This is partly due to their exodus from their traditional land, which was nearly complete by the late nineteenth century.  Through the generations, many lost their identity as Hia Ced after living among other native groups or in towns like Ajo, Gila Bend, and Phoenix.[10]  In the Papago Land Claims Settlement of 1968 the Hia Ced O’odham were lumped in with the Tohono O’odham, and some U.S. officials did not believe Hia Ced still existed.[11]  In 2003 the Tohono O’odham nation purchased land with the intent that it be used by the Hia Ced who were left out of previous negotiations with the United States government, if they so chose.[12]  The Hia Ced O’Odham are currently estimated to number about one thousand.

[2] Geraldo L. Cadava, “Borderlands of Modernity and Abandonment: The Lines within Ambos Nogales and the Tohono O’odham Nation,” The Journal of American History 90, (September 2011), 362.