The Barry M. Goldwater Range is a United States military bombing and gunnery range located in southern Arizona, in the heart of the Sonoran Desert.  The southwestern boundary of the range extends to the U.S.-Mexico border, and portions of the range boundary lie adjacent to the Cabeza Prieta National Wildlife Refuge and the Sonoran Desert National Monument.  Situated between 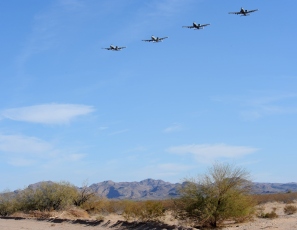 Yuma and Tucson, the Goldwater Range consists of approximately 1.7 million acres of relatively undisturbed wilderness.[1]  The U.S. government has separated the range into two military training areas: the Gila Bend sector, which encompasses the eastern side of the range, and the Yuma sector which encompasses the western side.  The U.S. Air Force uses the airspace above the Gila Bend sector to practice air-to-air maneuvers and to engage targets on the ground with live ordinance.  The Yuma sector is used by the U.S. Navy and Marine Corps for both air and ground-based training exercises.[2]

The history of the area that encompasses the Goldwater Range dates back thousands of years.  Archaeologists have discovered prehistoric settlements and gravesites from indigenous people who lived in the region mo 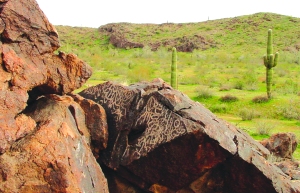 re than 10,000 years ago.[3]  Pottery fragments and pictographs that adorn rock walls have helped historians piece together the story of what life was like for indigenous people living in this hostile environment.  Although the Goldwater Range was set aside for bombing and gunnery practice, the military has taken special precaution to prevent damage to culturally and historically significant sites.[4]

During the past two centuries, the area has been used for many different activities, such as ranching, mining, and military operations.  Early ranching activity originated in the area that is now Organ Pipe Cactus National Monument and extended into the Goldwater Range.  Prospectors passed through the area on a trail named El Camino del Diablo on their way to California to search for gold.  Mining on the Goldwater Range began in the 1850s and continued until the land was withdrawn for military use in 1941.[5]

The Goldwater Range is home to many endangered species, such as the Sonoran pronghorn antelope, the cactus ferruginous pygmy owl, and the desert bighorn sheep.  The U.S. Department of Defense and the U.S. Fish and Wildlife Service have worked together to develop programs to monitor the effects of military activity on the Sonoran pronghorn antelope.  When the pronghorn antelope are present within five kilometers of designated target areas, the Air Force either relocates or cancels the mission.[6]  The Fish and Wildlife Service has also created waterholes throughout the range to help sustain larger animals like the desert bighorn sheep.[7]