Native Americans in the northern Sonoran Desert region had little to no contact with Europeans until 1540. At that time, the Spanish government regarded the area as a dry, arid, Native American-infested wasteland with few useful resources. The center of New Spain, Mexico City, was far removed from this region and consequently the area was of little importance to the Spanish at the time. Things changed when Franciscan Friar Marcos de Niza ventured into the area and returned spreading rumors of seven cities of gold in New Spain’s northern frontier.[1] These rumors were enough to entice Spanish conquistador Francisco Vazquez de Coronado to conduct an expedition into the area. The ensuing interaction between the Native Americans of the northern Sonoran Desert region and the Europeans shaped the history of the region.

Coronado followed Fray Marcos de Niza and other guides in exploring the region. Unfortunately for Coronado, he did not find the fabled seven cities of gold, only a few scattered Native American settlements.[2] This failed expedition resulted in the northern Sonoran Desert region and its people being left alone for the next forty years. In 1583, Antonio de Espejo, a Spanish explorer, led nine soldiers through this region searching for precious metals.[3] Espejo found several potential mining areas, but none were of enough significance to persuade the viceroyalty of Mexico to allocate scarce resources to an area so far out on the northern frontier of their colony.

The next incursion onto Native American lands by Europeans did not come from Spaniards in search of resources, but rather from missionaries seeking converts. In 1613, the Spaniards and the Yaqui Indians came to an agreement that opened the door of the northern Sonoran Desert region to missionaries.[4] Franciscan missionaries used this agreement to proselytize the entire Southwest. They sought first to convert the sedentary and peaceful Hopi tribe of northeastern Arizona in 1629.[5]  They were only marginally successful, and the Hopis poisoned and killed several friars who visited the area. Due to violence and backlash against the Spanish presence in the furthest northern territories in Arizona and New Mexico, Spanish missionaries turned their focus to the Pimería Alta (or upper land of the Pimas), located in the northern Sonoran Desert region.

The Native American population in the Pimería Alta, namely the Pimas and Tohono O’odham, who were said to be more docile than their northern neighbors, were the focus of Jesuit priest Eusebio Francisco Kino.[6] Kino grew up in northern Italy and went to Jesuit school in Austria before coming to Mexico in 1681. In 1687, Kino was appointed as the missionary to the Pimería Alta and he set up his headquarters on the San Miguel River, naming it Nuestra Señora de los Dolores. Kino was very charismatic and friendly; most of the Native American villages that he visited welcomed him with food. It was not just Kino’s character that charmed the Native Americans; he also always came bearing gifts. These gifts included seeds, vegetables, fruit trees, and small herds of livestock, all of which improved the lives of the people of the Pimeria Alta.[7]

During Kino’s first expeditions in 1691, he explored and set up many missions near his headquarters in Dolores. In 1696 he ventured further north, this time making contact with the Sobaipuri tribe on the San Pedro River.[8] The following year Kino explored up to the Gila River, crossing through modern day Organ Pipe Cactus National Monument along the way. Kino’s biggest influence was not on the areas he explored near the Gila River or on his expeditions further north, but on the town of Sonoyta, where he arrived in 1698. Kino called Sonoyta “a post very suitable for a great settlement, because it has good pastures and rich lands.”[9] In fact, Sonoyta was just the type of place Kino was looking for, as he had been searching for a post that could pave the way for a land route into California from northern Sonora. Kino helped establish El Camino del Diablo (the Devil’s Highway), a trail that linked Sonora (through Sonoyta) to the Spanish colonies in California. Sonoyta itself became very successful at raising cattle and planting crops introduced by Europeans, such as wheat. As a result of Kino’s gifts, many Native Americans in the region began using domestic animals and planting foreign crops. 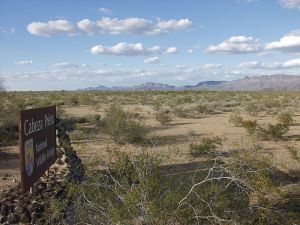 Father Kino died in 1711 and much of the missionary presence in Pimería Alta died out with him. The Pimería Alta was not given much attention by Spanish officials or missionaries again until the 1730s.[10] In that decade Jesuits began returning to the area but they managed the area very differently than Father Kino. The missionaries who came over were much more authoritarian than Kino and tried to stop the Pimas from traditional customs such as ceremonial drinking and polygamy. They were not very successful, and once the missionaries left, the Pimas took the livestock the Spanish had given them and left the settlements to practice their own beliefs. It was clear that the Pimas were growing frustrated with the Jesuits, and the discovery of silver in 1736 only exacerbated the problem.

Even though the silver mine was mostly barren by the time the Spanish arrived, due to being despoiled by opportunistic locals, this discovery still lured more Europeans into the area.[11] Tension began to develop between the rough Spanish miners and the Native Americans of the Pimería Alta. The Yaqui Indians, who lived south of the Pimería Alta, revolted in 1740 due to exploitative labor practices.[12] The growing animosity between the Native Americans of the Pimería Alta and the Europeans in the area (both miners and missionaries) came to a head in 1751. The allegedly docile Pimas and Tohono O’odham in the area rebelled in 1751 and wreaked havoc on any symbol of European influence in the area.[13] The missionaries fled the area and did not return again until 1757. When they returned and attempted to set up another mission in Sonoyta, the Pima revolted again. Efforts to convert the Pimas to Christianity ceased, and in 1767 King Charles III of Spain expelled the Jesuits from all Spanish provinces in the New World, ending the formal missionary effort in the northern Sonoran Desert region.[14]

There were several transfers in power after this point, starting with New Spain shifting from the control of the Viceroy to that of the King of Spain in 1776.[15] These shifts had very little effect on the Native American populations in the northern Sonoran Desert region, which shows the waning influence of Spain in the area. This regression for the Spaniards meant that they would not reinvest a lot of time or resources on the Pimería Alta from this point on. The larger shift in power came with Mexican independence in 1821. Mexico as a nation-state was in chaos after independence, so it also gave little attention to the Pimería Alta. However, in the 1840s, Mexican settlers and miners did come into conflict with the Native Americans in this region. Soon after, the United States declared war on Mexico, which resulted in much of the Pimería Alta being put into the hands of the United States. For the Native Americans of the Pimería Alta, this meant they were going to have to deal with the same problems, just from a different group of foreigners; it was certainly something they had faced many times before.