To fully understand the Mexico-United States border, one needs to understand the history of the people who have called this area home for centuries.  The Sonoran Desert and its surrounding areas are hard places to live, however a few Native American tribes were able to sustain themselves here.  As the United States spread west and Mexico became established to the south, a border was formed in Native American homelands, and these people have since been heavily impacted by borderland culture and territorialization.  The content that follows will focus on two tribes whose existence was uniquely impacted by the border, within the time frame of 1848 to 1916.

The Pascua Yaqui posess deep roots in the Sonoran Desert area.  The earliest confirmed date proving their existence here is 552 AD.  A hunter and gatherer society they formed family groups alongside the Yaqui River.[1] In the year 1533, the Yaqui saw a group of Spanish explorers, it was the first time they were contacted by Europeans.  The Yaqui were a naturally peaceful people, but proved they could raise a significant fighting force as they succeeded in fighting the Spanish off through 1608 and 1610.  “Nevertheless, the Yaquis preferred peace. They asked the Jesuits to enter Yaqui villages to do missionary work and economic development. Most of the 60,000 Yaquis settled into eight sacred towns or “pueblos” and built churches.”[2] 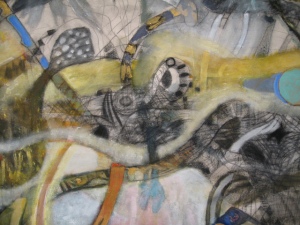 The Yaqui spent decades keeping the Spanish out of their homelands.  Following Mexican Independence from Spain in 1821, it was the Mexicans that the Yaqui were fighting to keep out of their territory.  “In 1868, 600 Yaqui men, women, and children were captured near Vahkom Pueblo by Mexican state and federal troops. Their arms were taken, and 450 were locked in a church. During the night, the church was shelled. 120 of the people inside were massacred.”[3]  This did not deter the Yaqui from continuing to believe in their autonomy and to fight for their homeland.  The Mexican government continued to have conflict with the Yaqui and began deporting captured Yaqui members from their homeland to various Central American locations.  “Significant Yaqui relocation occurred from the United States to Sonora and from Sonora to the United States during the 1880s. In 1897, a peace treaty was signed at Ortiz, Sonora between the Yaqui people and the Mexican government.”[4] After two years of peace, fighting returned and would sporadically continue through the middle of the Twentieth century.  The Yaqui represent a unique perspective history of the borderlands.  Often, when studying Native American relations we focus on how the United States government treated these people, not the Mexican government. 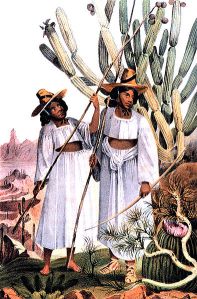 The western border extended to the Gulf of California and the eastern border was the San Pedro River.  One of the most important pieces of legislation concerning the Tohono O’odham happened to be the Gadsden Purchase in 1853.  The Gadsden Purchase attempted to solve years of border disputes and effectively split the Tohono O’odham land between the United States and Mexico.[5] According to the terms of the Gadsden Purchase, “the United States agreed to honor all land rights of the area held by Mexican citizens, which included the O’odham, and O’odham would have the same constitutional rights as any other United States citizen.”[6]  However, problems arose as the United States expanded westward, creating a demand for land.  This demand was fueled by the Transcontinental Railroad and the prospects of mining that the West offered.  “As miners, ranchers and farmers came onto their U.S. homelands, especially near water sources, the Tohono O’odham generally retreated farther into the western deserts. They hadn’t recorded their land ownership because Indians usually did not consider land an item of individual possession.”[7]  In an attempt to resolve the problem of land disputes the United States Federal government designated land at San Xavier del Bac for the O’odham in 1874.  The larger, main reservation was set up for the O’odham in 1916.  Without a doubt the Tohono O’odham people and their culture impacted the area, especially the state of Arizona.  “A place called “Arizonac” appears in Sonoran records during the Spanish rule of Mexico. It became part of the U.S. after the Gadsden Purchase. “Arizonac” is derived from the Tohono O’odham words “ali” meaning small and “shonak” meaning place of the spring. Or more succinctly, a place with little water.”[8]

The Pascua Yaqui and the Tohono O’odham are often overlooked by a general study of history.  However, each of these Nations had a very unique existence and history in the borderlands.  First, the Yaqui fought with the Spanish and later the Mexican government for decades to protect their culture and more importantly their land.  Historians frequently tell stories of conflict with Native Americans and the United States government, but rarely do we get the perspective of the Yaqui.  Next, the Tohono O’odham had their land split by the border created by the Gadsden Purchase in 1853.  The border made it impossible for the O’odham to freely travel within their native lands.  In conclusion, the border alienated both of these Native American tribes due to high demand for the land they inhabited for centuries.