A mere 60 miles from the Arizona-Mexico border, the once quiet agricultural town of Altar now bustles with activity as the last depot on illegal migrants’ trek al Norte. Since the border crackdowns of the 1990s in U.S. cities, the harsh desert of southern Arizona became the most viable backdoor into the United States; and Altar has become the

staging point for entry, attracting scores of migrants daily from all over Mexico and Central and South America. The entire economy of Altar is based on the business of human smuggling,[1]both formally and informally. The plaza is lined with permanent shops offering desert survival supplies and anti-detection wares like black ski masks, electrolyte-infused water, canned goods, and foot powder. There are also a number of run-down motels, which function as communal flophouses, where migrants can rent a

piece of plywood and a blanket for 30 pesos and await their journey north.[2] Coyotes prowl the streets by day looking for customers, known as pollos (chickens), to fill their jitney vans that will make the two-hour drive north when the time is right.[3] People smugglers and drug traffickers, narcos, are easily identified as those on cell phones or pay phones, constantly getting updates from a vast communication network, as to the status of certain border-crossing points.

As the United States has poured more money and resources into clamping down on border security, crossing has become more difficult and dangerous, attracting ambitious, yet far more nefarious interests into the human smuggling game. Recognizing the lucrative opportunities to exploit disoriented migrants, the Mexican drug cartel, more commonly referred to as “the Sinaloa mafia,” has seized control of the Altar corridor and exacts a surcharge on every migrant making the journey from Altar to the border through 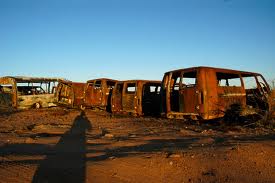 makeshift checkpoints or extortion of jitney van drivers.[4] Non-compliance with unofficial mafia law can signal violent retribution and the residents and migrants of Altar are increasingly subject to the whims of an unpredictable and domineering network of organized crime.  The tightening of the border has only prompted more sophisticated efforts to transgress it, and this fact is realized fully in places like Altar.